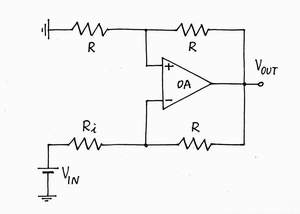 1. INTRODUCTION. Negative resistance is one of the most interesting, strange and even mysterious circuit phenomena. Negative resistors and their most popular circuit implementations - negative impedance converters (NIC) - are real nightmare for students and their teachers because they are explained by formal means, which do not reveal the nature of the phenomena. Reading these resources, students will know what negative resistance is (for example, "a situation when current is a decreasing function of voltage"), but they will not really understand it. There is a need of "human-friendly" explanations of these legendary circuits. For this purpose, the following goals are posed in this work:

• to reveal the basic idea behind negative resistance phenomenon by using a set of heuristic means,

• to show how to obtain negative resistance,

• to establish a universal procedure for building various electronic circuits with negative resistance.

As human beings (not computers), we need something more than scientific facts, reports, formal explanations and definitions. In order to really comprehend the phenomenon of negative resistance (and of every new thing in this life), we need first to know what the general idea behind it is. Only, basic circuit ideas are in fact "non-electrical". They do not depend on the specific implementation (tube, transistor, op-amp etc.); they are eternal. So, we may find them in our routine.

2.1. Extracting the general idea from our routine.

We may observe this phenomenon in situations where someone (something) interferes to some extent in our life [1, 2 ]. He/she/it may help or impede us in three degrees (under-, exactly- or over-). Negative resistance represents the last degree when someone "over-helps" or "over-impedes" us. Examples: parents over-help children doing their work as with a magic wand, the excellent husband refunds the whole sum that his wife has spent and even adds additional money:), the pneumatic amplifier over-helps the driver so much that he has only to try pressing the pedal and it moves itself etc.

2.2.1. A voltage source acting as a negative resistor. In order to compare an ordinary "positive" resistor R

2.2.2. A current source acting as a negative resistor. Now, let us assemble the dual circuits where the components are connected in parallel to the loads so that the same voltage is applied across them. As a

3. HOW TO MAKE NEGATIVE RESISTORS. 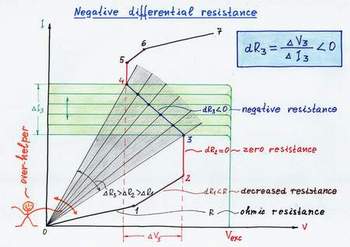 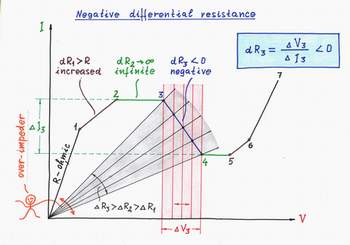 It seems quite strange that a "circuit" true negative resistor -R contains a "positive" resistor R. Only, we may see this idea in many cases of our routine where, in order to begin creating something positive (-R), we first need something negative (R). Then, we produce two (or many) times more positive quantity (-2R) in order not only to compensate the negative quantity (R) but also to get the desired positive quantity (-R = -2R + R). There are a few funny examples of this worldly phenomenon in 1, 2, 3.

According to this idea, the "positive" resistor R converts the current into proportional voltage drop VR = R.I (see the left picture below); then, the "over-acting" varying voltage source VH (the amplifier) doubles this voltage drop thus producing an additional voltage VH = 2R.I. Half the voltage (VR) compensates the voltage drop VR; the rest half (VR) adds to the voltage of the excitation input voltage source VIN. As a result, the "positive" resistance R is converted into negative one -R. That is why, these kinds of circuits are named [4] negative impedance converters (NIC). 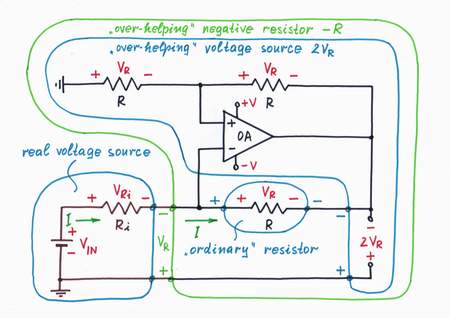 In order to put this idea in practice, we may connect in series to the resistor R the output part of an op-amp amplifier, which doubles the voltage drop across the resistor. All the op-amp inverting circuits (op-amp ammeter, transimpedance amplifier, op-amp integrator, op-amp inverting current source etc.) exploit this idea. Only, in these circuits the op-amp acts as an additional "helping" voltage source, which compensates "exactly" the voltage drop across the resistor R2. Maybe, the most suitable example of this trick is transimpedance amplifier. Actually, the main task of the op-amp in this circuit is to remove (zero) the resistance R. In order to convert this "positive" circuit into negative one, we have just to "mislead" the op-amp making it "over-act". If we connect a voltage divider (with K = 0.5) to the non-inverting input, we will make the op-amp "over-compensate" twice the voltage drop VR; thus we will get a negative resistance -R.

An operation. The op-amp continuously compares 1/2 of its own output voltage VOA with the voltage drop VR across the resistor R by subtracting the two voltages. It "observes" the result of the comparison - the voltage difference between the two inputs and keeps it almost zero by adjusting the output voltage VOA. The op-amp is "misled" - it has to generate two times higher voltage VOA = -2VR = -2R.I, in order to keep zero voltage between its two inputs. Half the voltage (-VR) compensates the voltage drop VR; the rest half (-VR) is added to the excitation voltage source VIN. The resistance of NIC is RNIC = (-V)/I = -R.

3.3.2. ...with "over-impeding" voltage source. If we reverse the additional voltage source, it will subtract its voltage from the voltage of the input voltage source VIN (traversing the circuit again clockwise the signs are - VIN +, + VI -); now, VI will "over-impede" VIN. As a result, it reverses the current passing through the resistor R while the voltage across the new "resistor" -R keeps the old polarity. 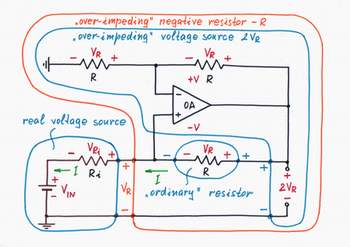 In this case, we have again to make the op-amp produce two times higher voltage than the voltage drop VR. Only, it has now to act as an "over-impeding" voltage source. Again, if we connect a voltage divider with K = 0.5 between the op-amp output and the inverting input, we will make the op-amp to "over-act". Actually, we have obtained the classical circuit of an op-amp non-inverting amplifier with K = 2.

An operation. As above, the op-amp continuously compares 1/2 of its own output voltage VOA with the voltage drop VR across the resistor R by subtracting the two voltages. As usual, it "observes" the result of the comparison - the voltage difference between the two inputs and keeps it almost zero by adjusting the output voltage VOA. Again, the op-amp is "misled" - it has to generate two times higher voltage VOA = 2VR = 2R.I, in order to keep zero voltage between its two inputs. Actually, it doubles the voltage VR appearing at the left side of the "ordinary" resistor R and applies it to its right side. Half the voltage (VR) compensates the voltage drop VR; the rest half (VR) is subtracted from the excitation voltage source VIN. As a result, the current I reverses its direction - now it flows into the input voltage source. The resistance of NIC is again RNIC = V/(-I) = -R.

4. CONCLUSIONS. Applying the heuristic approach in this paper,

• first, we have revealed the basic idea behind negative resistance circuits,

• then, we have derived a few procedures for building true negative resistors,

• finally, we have built a set of real op-amp circuits having negative resistance.

Circuit stories: How do we create dynamic resistance?   How do we make decreased, zero and negative differential resistance?

How do we make decreased, zero and negative resistance?   What is the idea behind NIC?

Wikipedia discussions: Another fresh viewpoint at negative resistance,   What is the basic idea behind negative impedance converter (NIC)?